Motif video recording software version 5.0 was released today. This version features an enormous number of new features which continue to make Motif the most capable and versatile solution for biologists looking to recording video and other data from behavioural experiments.

This release adds support for running the Motif software on Windows 10. The user interface and the available features are identical to when running the software on Linux.

Motif already allows control of IO and reading of environmental sensors from within the software, including support for the low cost phidget devices. We now support the entire phidget range. 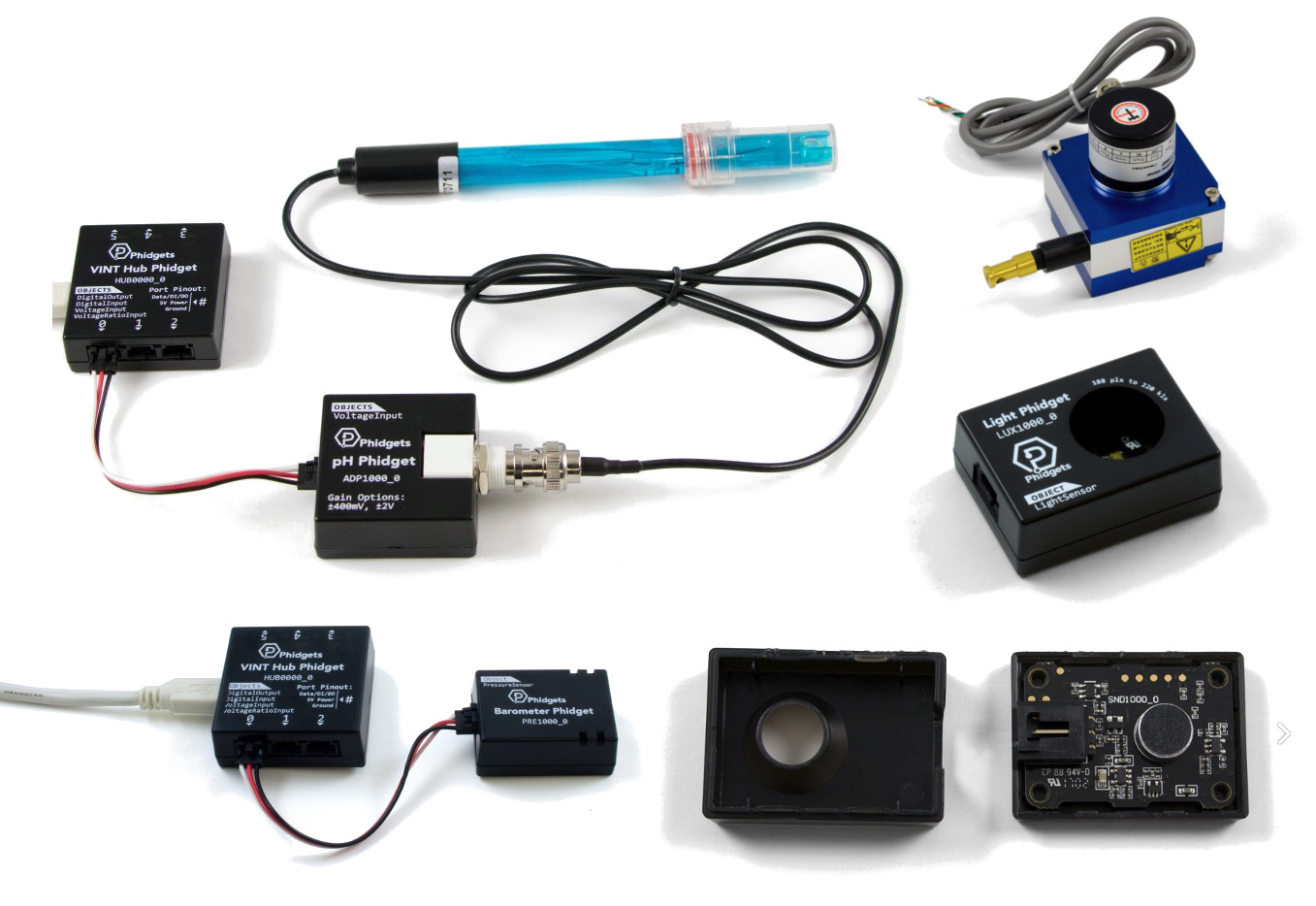 a small sample of the existing supported IO devices

In Motif 5, I/O and DAQ support has improved to support more types of hardware, and control and monitoring of configured IO has been improved throughout the software. Of particular note are the following enhancements: 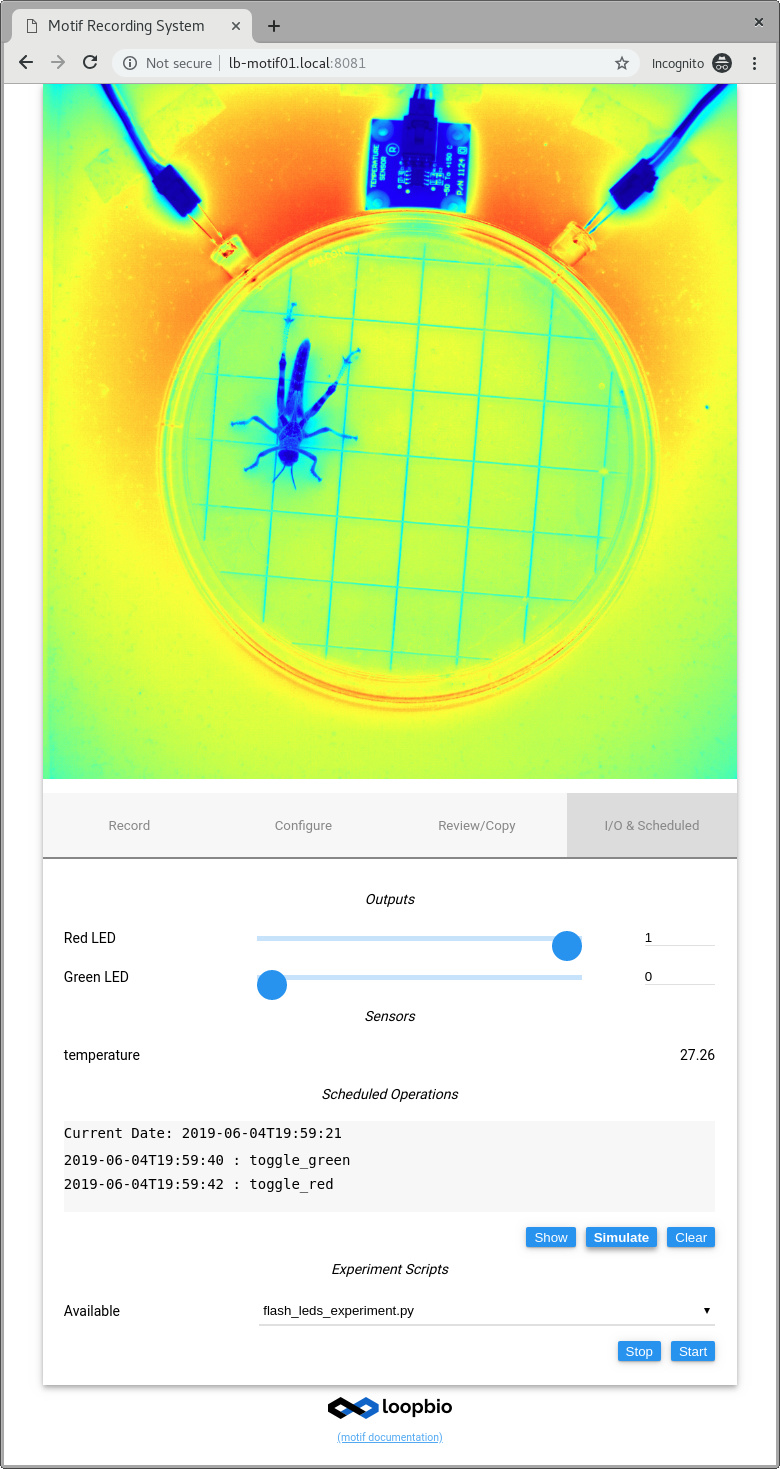 Improved IO support. Current sensor values and outputs are shown and adjustable in the UI. The value of any configured output can be changed programatically via the Motif API or scheduled to do so.

A major new feature is the improvement and integration of scripting and experimental scripts into the user interface. Experiment scripts are written in Python (by default, MATLAB and other scripting environments are also supported).

Users can define experimental scripts and then launch these from within Motif. Scripts are placed in a platform-specific directory. These scripts can interact with Motif using the Motif API in several ways:

Scripts placed in the appropriate directory are then shown in the user interface, where they can be launched.

Scripts can be complicated closed loop image processing operations, collections of camera / imaging setting changes, or complete descriptions of experimental protocols including recording time and duration, metadata, stimulus, and much more. For example, the script below implements the following hypothetical experimental paradigm:

Record for 30 minutes, every-hour-on-the-hour between 6am and 4pm. While recording alternately flash a red and blue LED every second.

The user-interface has been polished and unified across the various modes of Motif operation: single-camera mode, and the multiple camera 'master' and 'index' modes. Features which were previously restricted to single camera interfaces (IO and timed recording) have been added to the multicamera interface. 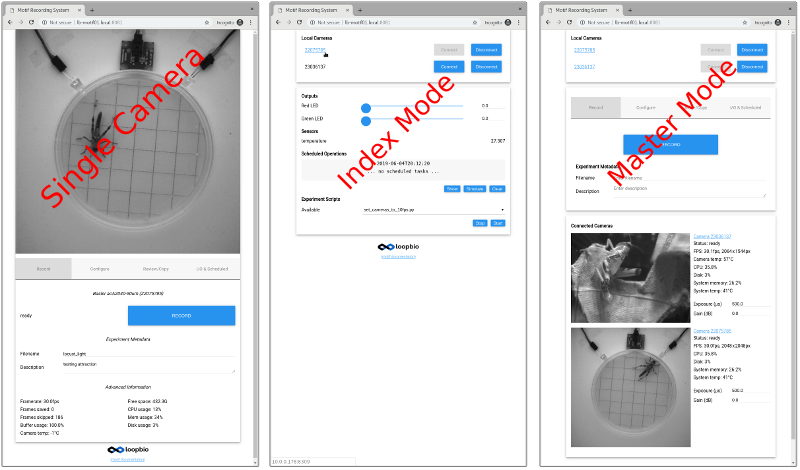 The user interface of the three main modes of Motif operation

Motif 5 adds the ability to, with very low latency (<1ms), stream realtime images from the camera, without interfering with the recording, compression, or any other Motif functions. This allows realtime image processing algorithms for closed loop experiments.

Such realtime algorithms can freely use the Motif API and thus, for example, provide stimuli to the animal using configured Motif IO, or user provided custom outputs.

We unveiled this feature at Göttingen Neuroscience Conference with the demo below: A Motif system simultaneously records video and detects the position of the animal before providing a stimulus illuminating LEDs underneath (using Motif IO). Motif saves not only the video, but synchronized with it, the IO status too. From the saved data file Motif thus allows easy analysis of behaviour and stimulus after the experiment.

Interested in tracking? At #NWG2019? Come and disco-ver our booth and check our tracking solutions #motif and #loopy https://t.co/Fw70QWnAuh pic.twitter.com/IntBxWB5Ex

If you are planning to perform closed loop experiments then consider Motif, it solves all the saving, I/O, reliability, and synchronization problems for you.

A small sampling of the more than 300 supported cameras.

Motif 5 added support for a number of different trigger and synchronization scenarios commonly necessary when synchronizing video recording with neurophysiology recording or stimulation setups. This allows Motif to either take a variety of 'master' or 'slave' roles with respect to the the triggering and recording of frames. Motif can consume trigger pulses produced by other hardware, or generate a variety of different trigger pulses for recording by the secondary neurophysiology hardware.

If you need video synchronized with neurophysiology, electrophysiology, or other hardware devices then contact us to see what Motif can do for you.

Comprehensive documentation is provided online and is continually updated. Documentation explains the use and confiugraton of Motif, as well as use of the Motif API and example experiment scripts. 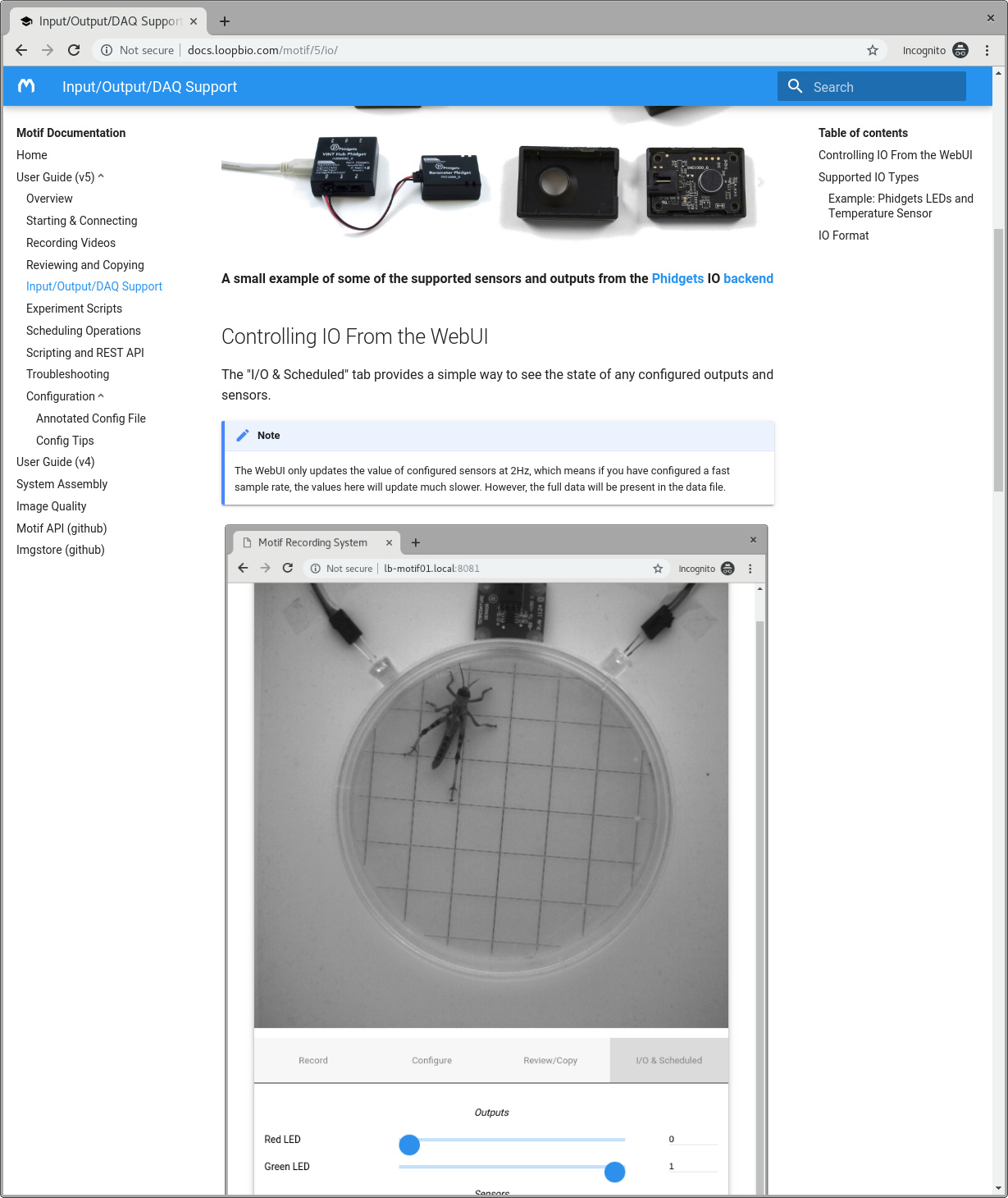